A city of monuments! Skopje has amazing statues of historic figures and national heroes…here, there, and everywhere. All are impressive – but if I had to choose a favourite, it would be the monument in the city’s main square “Plostad Makedonija”. A gigantic marble fountain with water spurting in a sequence of heights around lions and ancient soldiers is centered by a pedestal on which a great warrior rides high on his steed.

The origin of Skopje is doused in mythology. The hero of the story came across a mammoth bolder between 7 mountains – which he recognized as a head without the 7 openings for the senses due to a spell that had been put on it. This hero took his sword and fashioned eyes, nostrils, ears and a mouth – and Skopje became a living, breathing, hearing entity – like the city it is today.

And what a city it is! We pass under the Triumph Arch, also called the Gate to Macedonia, completed in 2012 – dedicated to 20 years of independence from the former Yugoslavia.

The bridge leads to the white marble Constitutional Court – one of Skopje’s most stunning edifices.

A prominent statue of Philip II stands with his fist raised. I imagine him shouting, “divide and conquer” – a phrase attributed to him. And he did just that – being the first to conquer the Greek states, later uniting them. He was king of Macedon from 359BC until his assassination in 336BC, when his son Alexander the Great continued his mission in the worthiest of manners – as we all know, by age thirty he created (as in conquered) one of the most expansive empires in the ancient world.
Our Skopje Photo Gallery

Nearby is another crossing – the Stone Bridge – that goes to Carsija (Old Market) where the Ottoman past of Skopje lingers.

In the Carsija area there is a mix of colourful bazaars, mosques and small churches, and a Holocaust Memorial Center which opened in 2 011 to commemorate Jews that perished in Macedonia during WWII.

From here we climb steps with small restaurants/cafes jutting out on platforms along the way. Our goal is the fortress, which we find is mostly left in its crumbled state sparking imaginative visions of by-gone battles.

From the lofty fortress cliff we look across through the mist (or smog) to the 66m tall Millennium Cross. It was erected on Vodno Mountain in 2001 in celebration of the 2000th Anniversary of Christianity in Macedonia and the world. For a few days we faithfully go out after dark to see it illuminated by its 20,000 light bulbs – but nary a bulb is lit. We ask our hotel clerk as to why, to which he responds, “Oh? Must be problem.”

Mother Teresa, now canonized as Saint Mother Teresa, was born in Skopje. I say – no matter what religious persuasion one may be, or whether agnostic or atheist – this tenacious lady who dedicated her life to the most destitute in the world – the forgotten and downtrodden, the diseased and dying – is a true saint.

It is heartwarming to go through the small museum that is built over her birth home and where she ran about carefree as a child; a part of the old stone wall remains. We follow her life’s journey of meeting presidents and diplomats, of her holding the head and comforting a dying leper in Calcutta, of the many facilities she started for charity work, of her being a recipient of the Nobel Peace Prize in 1979. Always the humblest of spirits, I feel she asked God to let her die on a day that would let her slip peacefully and without fan-fare into heaven. She drew her last breath on the day Princess Diana died. 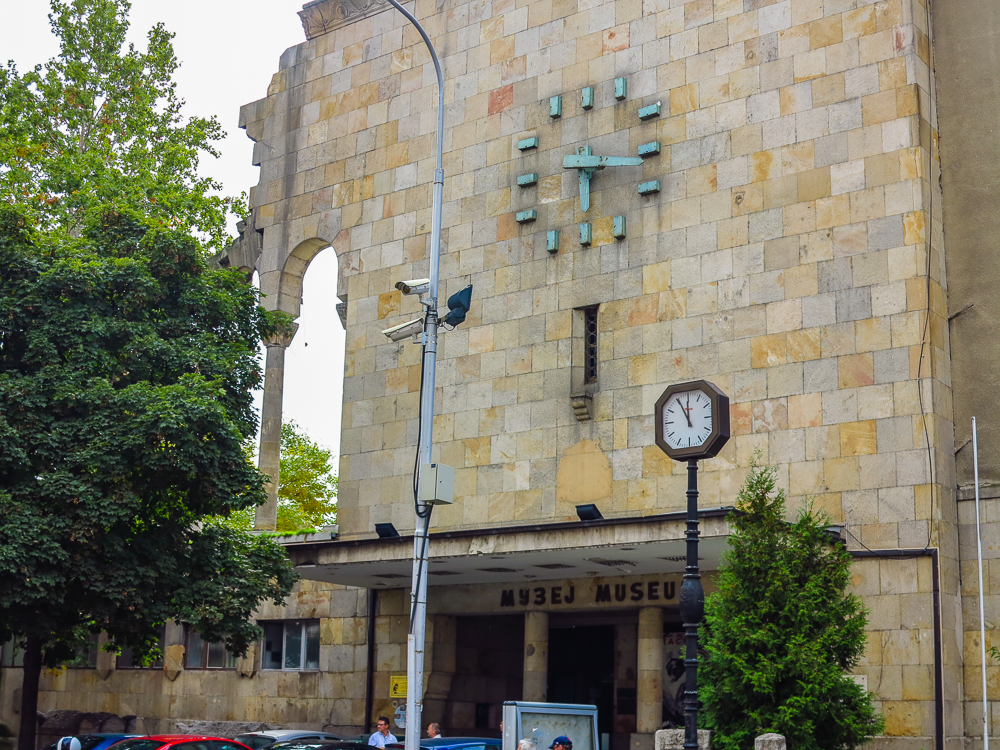 We walk further to see the old Railway Station with its clock that remains at the time it stopped at 5:17 on July 26, 1963 when an earthquake struck the city measuring 6.1 on the moment magnitude scale (MMS), (equivalent to 6.9 on the Richter scale). This catastrophic quake killed over 1,000 people, injured between 3,000 and 4,000, left 200,000 homeless and 80 percent of the city destroyed. Some outside portions of the building, which now houses the City Museum, have been left in the post-earthquake state.

It’s monument time again…..this one is for all the fallen heroes of Macedonia – on a platform that tops a circle of columns is an angel; before it are four horses rearing up, and in front of this a demi-god-of-a-man holds a torch high. Between the rises of various levels of stairs is a large urn-like receptacle in which an eternal flame burns bright.

We find no street entertainers for our Butler Busker Contest. For traditional Macedonian food – most claim meat roasted on a skewer is a local favourite – which we indulge in more than once. And try as we might, we could not find a good cappuccino!

The focus on erecting monuments is but a part of the new construction of buildings, and face-lifts to historic ones in Skopje – by day or night it is an enjoyable city to capture in memories – always in the hospitality of friendly locals.

And…my Finance Minister Rick’s final tally for Skopje is $225CDN a day (noting as well as accommodations, food and entertainment, the cost includes a direct flight from Belgrade to Skopje, which we chose over the cheaper 9 hour+ bus ride or 10 hour+ train ride). Without the airfare, but including the price of a bus/train ticket – the cost comes in at $180CDN a day.

We are next on our way to Pristina Kosovo – and we will ride in style in a Mercedes, opting for an owner/driver arranged car instead of a bus – are we getting soft?…maybe…probably…okay, yes!